Equality for Flatbush (E4F) is well known in Brooklyn for their seemingly constant organizing. Made up entirely of volunteers, they are frequently in the streets, fighting against gentrification and police brutality.

We spoke with organizer Katie Hydell about the work E4F is doing around these issues in Flatbush and beyond.

Who is E4F and when did you begin?

Equality for Flatbush (E4F) is a people of color-led, multi-national grassroots organization that does anti-police repression, affordable housing and anti-gentrification organizing in the Flatbush and East Flatbush communities of Brooklyn, New York. Ultimately, our goals are to end NYPD murders and to stop the displacement of low-to-middle income people within our community. Equality for Flatbush was founded in June of 2013 and is currently a volunteer–run organization. We seek to organize our communities for social change and justice through street outreach, social media campaigns, political advocacy, and direct action.

We see your stickers everywhere, especially since a couple of us live in Flatbush! Can you talk a little bit about the #BeforeItsGone campaign?

BEFORE IT’S GONE // TAKE IT BACK: Documenting Brooklyn — Fighting Gentrification (B4G) is a neighborhood and web-based response to the crisis of gentrification of Brooklyn, NY. 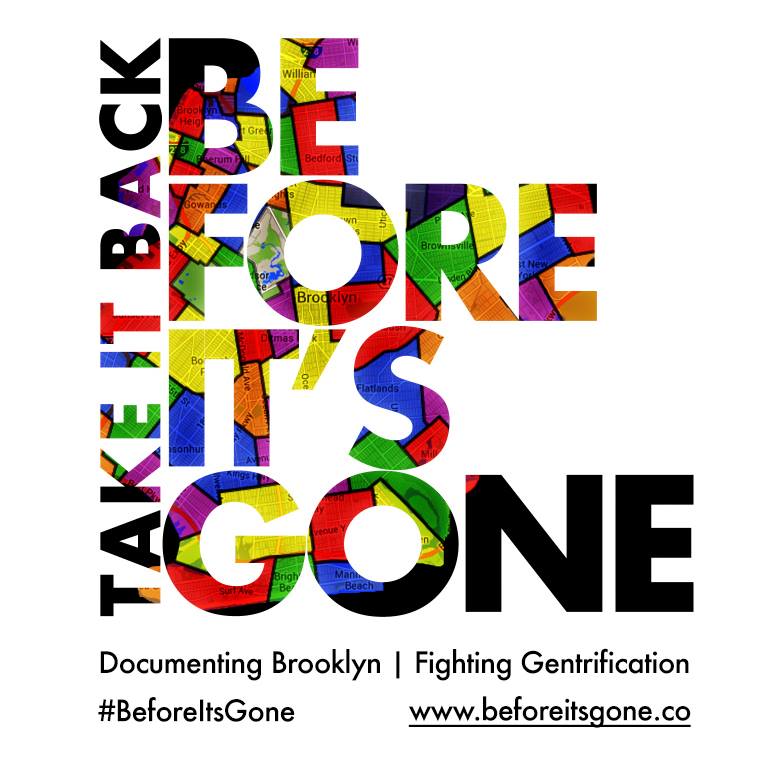 Our main goals are to:

How do you think the results of the U.S. Presidential Election will affect the work you’re doing? What about at the local level?

We now have a landlord as our president. Not only is Donald Trump racist, anti-immigrant, anti-LGBTQ, and anti-Muslim—he’s a New York City landlord. We don’t have to tell you how we feel about landlords. To make things even worse, he has appointed a notorious NYC slumlord and real estate developer, his own son-in-law, Jared Kushner, as his senior advisor. This alone has major implications in our fight against gentrification in Brooklyn, because it shows us just how little our president cares about affordable housing in New York City, especially for people of color, who are the most affected by gentrification and displacement. So to have a racist NYC landlord as our president is a recipe for major problems ahead for us fighting gentrification in NYC. It sends a message to the landlords and developers that they have the backing of the U.S. president in their unscrupulous and racist tactics of harassment and illegal evictions that they have already been doing for years. 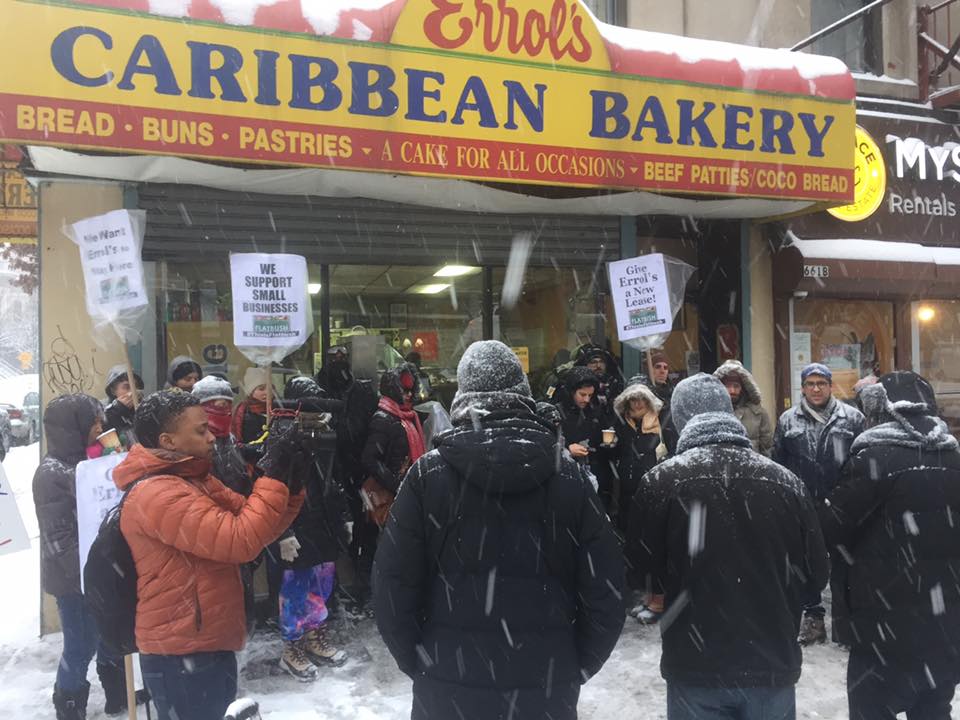 Our current mayor, Bill De Blasio, stated that he is pleased with Trump’s appointment of Jared Kushner as senior advisor. He says that Kushner, “is someone who really cares about New York City and is someone that would be very helpful to us. So I’m certainly pleased [Kushner will] be in that role.” This is terrifying coming from a mayor who has pushed a housing plan, against the wishes of the majority of residents of NYC and that accelerates the rate of gentrification, while at the same time receiving most of his campaign contributions from the real estate sector. Our mayor now has a friend in a top role in the White House.

The Trump administration has also made it clear that they are the administration of “Law and Order,” and that they are pro-police. With an administration backing the violence of police in our neighborhoods, we can expect more broken windows policing and racial profiling. Police brutality and gentrification go hand in hand. It is no coincidence that rapidly gentrifying areas have more police on street corners violently harassing our communities. 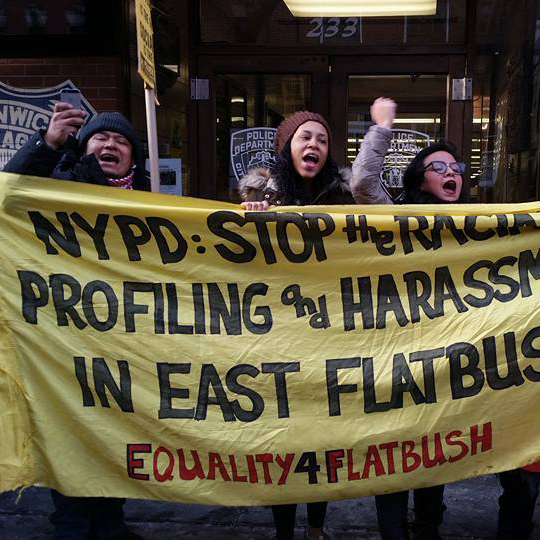 You maintain a very active e-mail listserv but also post a lot of flyers, especially around the campaigns. How do you see print fitting into your organizing over the next four years?

We use print for a variety of purposes. We have stickers, flyers in numerous languages, t-shirts, mugs, placards and banners. Even though much of our information is available online, flyering is one of the best ways to get the word out, especially to people who don’t have access to computers. We love doing outreach and talking to the community. Handing out flyers and stickers allows us the opportunity to talk to more people who are being affected by gentrification right here, right now. We can get the information out quickly and efficiently, while also connecting with our neighbors and hearing their stories. Our stickers are small, but colorful, and have our website printed on them. They are a great way to quickly get the word out in an engaging and fun way. We also love seeing our stickers all over the city! If you spot one of our stickers please take a picture and post it on our website or Facebook page!

February is Black History Month. The issues you organize around are obviously important every day of the year, but how does the work you do connect to the lives of Black people?

Gentrification and police violence disproportionately affect Black folks across New York City. Gentrification is a process of landlords pushing out long-time people of color to rent to newer white people with higher more flexible incomes. It is no secret that white bodies boom real estate. Neighborhoods that are rapidly gentrifying are also heavily policed. This is intentional and extremely racist and violent for the existing community. The NYPD harass and arrest the Black community on petty broken windows charges to “clean up” the streets and make the neighborhood more desirable to younger, whiter, and richer people to move in.  The lives of Black people are greatly affected by gentrification and the work that we do is very much connected to the history of racism in this country. We are still fighting racism in this country on all fronts and the work that we do specifically focuses on fighting the racism of Gentrification and police violence in our communities. 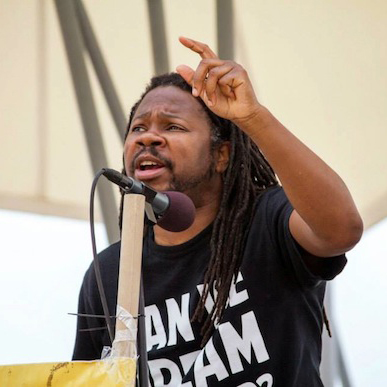 Please go to our website where you can tell your story, find a variety of resources, get on our listserv to start volunteering with us, and donate! We are an all-volunteer run group, so donations are a great way to support our work and keep us able to fight with Brooklyn families every day.

You can also find us on Facebook where we post information and articles around the fight against gentrification every day!

We also have a  fundraiser event in March to raise money for our rapid response legal fund that will provide free legal services by trusted attorneys to tenants, homeowners, small business and people impacted by police violence across Brooklyn. To buy tickets, go to https://e4fsues.splashthat.com. You can find more information about the fundraiser on the Facebook event page.

Community Spotlight is a blog series that seeks to connect people power with print power. Each month, we feature an organization using print to do great work in their community and fight for a more just world. Subscribe and let’s start building together. 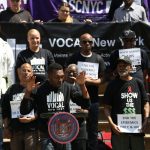 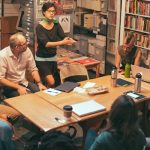