Before Roe v. Wade, one group of women in Chicago took matters into their own hands.

JANE is an inspiration—a beautiful example that battles can be won without begging. This collection may not only be viewed in terms of abortion rights, or even strictly in terms of the struggle for women to have control over their own bodies, but also in terms of any group of people faced with the force of authority attempting to control their lives. Today they can be seen as an effective underground organization operating with utter disregard for the letter of the law—women taking their lives into their own hands and taking responsibility for their actions, without asking for anyone’s permission.

This zine is out of stock with no future Radix edition currently planned. 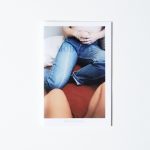